Memoirs of an Infantry Officer

The Memoirs of George Sherston 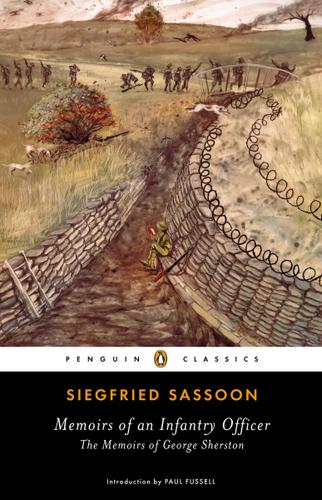 The second volume in Siegfried Sassoon’s beloved trilogy, The Complete Memoirs of George Sherston, with a new introduction by celebrated historian Paul FussellA highly decorated English soldier and an acclaimed poet and novelist, Siegfried Sassoon won fame for his trilogy of fictionalized autobiographies that wonderfully capture the vanishing idylls of Edwardian England and the brutal realities of war.The second volume of Siegfried Sassoon's semiautobiographical George Sherston trilogy picks up shortly after Memoirs of a Fox-hunting Man: in 1916, with the young Sherston deep in the trenches of WWI. For his decorated bravery, and also his harmful recklessness, he is soon sent to the Fourth Army School for officer training, then dispatched to Morlancourt, a raid, and on through the Somme. After being wounded by a bullet through the lung, he returns home to convalesce, where his questioning of the war and the British Military establishment leads him to write a public anti-war letter (verbatim the letter Sassoon wrote in 1917, entitled "Finished with the War: A Soldier’s Declaration", which was eventually read in the British House of Commons). Through the help of close friend David Cromlech (based on Sassoon's friend Robert Graves) a medical board decides not to prosecute, but instead deem him to be mentally ill, suffering from shell-shock, and sends him to a hospital for treatment. Sassoon's stunning portrayal of a mind coming to terms with the brutal truths he has encountered in war—as well as his unsentimental, though often poetic, portrayal of class-defined life in England at wartime—is amongst the greatest books ever written about World War I, or war itself.For more than seventy years, Penguin has been the leading publisher of classic literature in the English-speaking world. With more than 1,700 titles, Penguin Classics represents a global bookshelf of the best works throughout history and across genres and disciplines. Readers trust the series to provide authoritative texts enhanced by introductions and notes by distinguished scholars and contemporary authors, as well as up-to-date translations by award-winning translators.